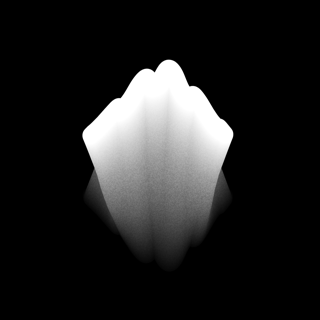 “In this art they, the darknesses and brightnesses, constitute the woof of the play.
They carry a chief burden of the transmitted feeling.“
- Marry Hallock-Greenewald, “Nourathar: The Fine Art of Light-Color Playing”

Inspired by the discoveries pursued in Film recording technologies, in the late '20s, Graphical Sound emerged as a new form of sound synthesis in which captured hand-drawn shapes on paper or film were converted into voltages and played out loud.

To understand better the background of associating images with sounds in a synesthetic approach, we will have a look, starting with the 17th century, at some of the earliest ideas and attempts in history that regard systems of sound visualisation and visual music. Amongst others, the Jesuit colour organs, Harmonographs, Cladni's Klangfiguren and Mary Hallock Greenewalt's methods.We will explore the emergence of Sound on Film Technique and the movements that followed in Soviet Russia and Germany and delve into a compendium of interesting machines and inventions that were to establish one of the first sound synthesis techniques.

The theoretical introduction will be followed by a hands-on exercise in which we will build a small light theremin to convert our hand-drawn / cut shapes into sound. Following a simple circuit diagram, we will hand-solder electronic components to enact a small optical sensing machine.

We will explore the juxtaposition of the historical and theoretical explorations into graphical sound with contemporary electronic techniques. The attendees will gain a better understanding of Opto-acoustical techniques and use them for their own musical experiments.

No prior experience in electronics is necessary.

None required. Appetite for drawing and electronics advisable.

In 2016, supplementary to her studies in Drawing, she wrote her graduation thesis on Graphical Sound and Visual Music. Much of the documentation and research was done in between 2015 and 2016 in Poland and Romania.